A connecting principle linked to the invisible 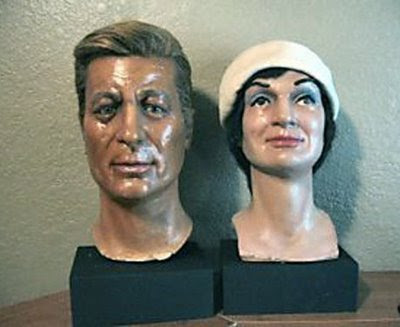 Well, as anyone who tried to tune in Saturday knows, that was a washout. Radio station politics are so viscous precisely because the stakes are driven through the hearts and minds of a generation lost in space! Andro-GenX/Y plotting re-entry even as we speak. Until such time, feast upon this report from recently recruited adjunct member Rock Pitts, whose work with the disturbingly Mannlicheresque Solid Eye and Dinosaurs With Horns goes without saying.

"Yesterday (a morbid anniversary) I looked up the JFK assassination on Wikipedia and discovered the Mannlicher Carcano reference for the first time. Aha!! Moments later I was researching a movie scheduled for latenight broadcast on KOCE, an inland empire PBS affiliate who shows public domain commercial free movies in the early AM. 'McKlintock,' a John Wayne western comedy known for it's extended comedic mudpuddle fistfight and the spanking of Maureen O'Hara, was to be shown. No, I wouldn't bother to tape it. IMDB research lead me to find the movie premiered in 1963. In the viewer comments I read that in photos of the JFK's funeral procession the word 'McKlintock' is seen on a theatre marquee. It was a weird moment when all the connections were revealed.

My weirdest JFK moment came in 1964. As a five year old Jackie and JFK were popstar icons for me, especially after I got my parents to buy me a pair of bobble-head dolls at a liquor store/truck stop on the way home from a dove hunting expedition in the Imperial Valley. They had magnets located behind their pursed lips and kissed when situated next to each other. I thought it was the funniest most wonderful thing. I remember JFKs funeral. I was recuperating from a skinned chin caused by a Flexi Flyer mishap, and watched from the couch with my grandmother. The strange thing happened a month or so later when my brother Joe picked up the JFK bobble-head on my dresser. The right side of the dolls head was smashed. Joe said "Whoa, Ricky what happened to this?"
and I said "Oh yeah, I knocked it off the dresser and it broke".
"When did that happen?" I didn't know way he was so concerned.
"I don't know a long time ago...a few months ...I think before Halloween." Joe stared at the doll shaking his head with his eyebrows raised and made his trademark 'shhhhsh' sound of disbelief. Maybe the world has my carelessness to blame!"
at 11:20 AM No comments: 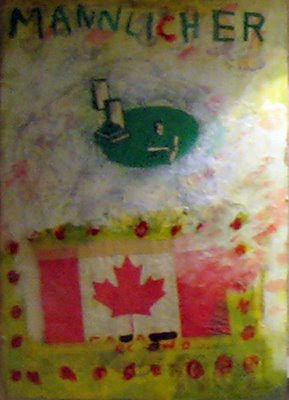 Just a heads up that this Saturday November 22 - the 45th anniversary of the so-called JFK assassination - the Mannlicher Carcano Radio Hour will once again be manifesting in a temporally extended mode: a four hour audio collage running from 9 AM to 1 PM Los Angeles time. Join us!

Click here to download the first single derived from "Rendezvous with Density" - a double-tracked rendition of Canada's national anthem entitled No (noise) Canada. All rise! 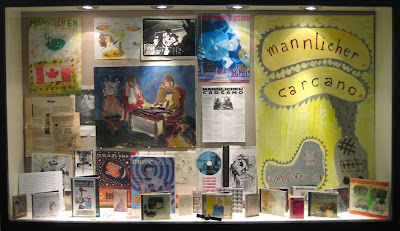 This is a picture of the wall-mounted vitrine dedicated to Mannlicher Carcano ephemera included in Untidy: The Worlds of Doug Harvey, which will close the day after a Moldy Slide Show with soundtrack by Mannlicher at LA Valley College on Nov 25th.
at 6:58 PM No comments: 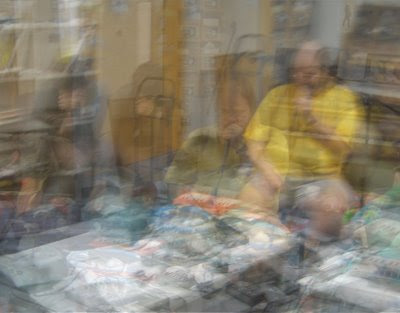 Never mind - I Did It Myself! Click here to download The Simulated Quadrophonic Condensation of yesterday's 4-hour Mannlicher Carcano Radio Hour, boiled down to a CD's-worth of more-or-less arbitrarily layered aural confections by Really Happening, now entitled "Rendezvous with Density." Enjoy! (PS: The singer at the end is repeating the phrase "Our table food is not Jesus, it is only a gift" from the record Religion for the Retarded - which I probably got off Otis Fodder.) 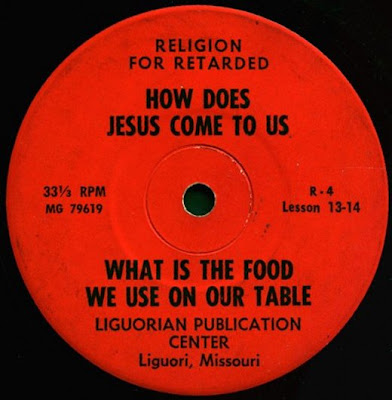 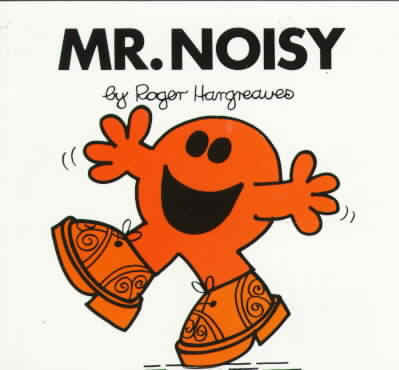 Here are links to the four 1-hour mp3s from yesterday's marathon radio show. We don't actually get hooked up until about halfway through the first hour, and the sportscasters never quite disappear, then towards the end there is an extensive audio vérité section chronicling disconnected Porter's unbeknownstly successful attempt to get on the air via SKYPE. Best to set up 4 discrete sound sources and listen simultaneously. Educational radio at its most!
Hour 1
Hour 2
Hour 3
Hour 4
at 2:03 PM No comments:

Now That the Buffalo's Gone... Crazy! 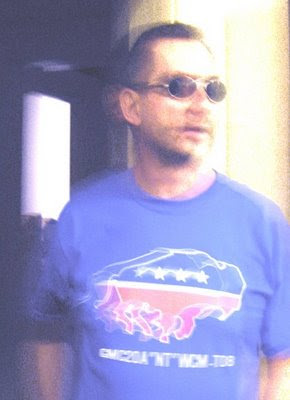 The band's limited edition commemorative GMC20A"NT"WCM-T08 tee-shirts -- destined for a co-branding with the Nader/Gonzalez 08 campaign (in alignment with the FDMS bloc of course) -- arrived today - November 6th - slightly later than expected. Our crack team of reverse engineering tee-modifiers will get to work immediately nevertheless. In the meantime, a heads-up that this Saturday's show will be an epic 4 hour extravaganza beginning at 9 AM Los Angeles time - with any luck it will include a radically deconstructed version of longtime Mannlicher collaborator Madonna's Dodger stadium gig, which at press time has traffic backed along Sunset Blvd all the way to the Prop 8 protests in Westwood. What a woild! Next weekend, listen for our first SKYPE link-up with Peas Porrigiott, Our Man Now In Czechoslovakia On Classical Keyboards.
at 9:00 PM No comments: 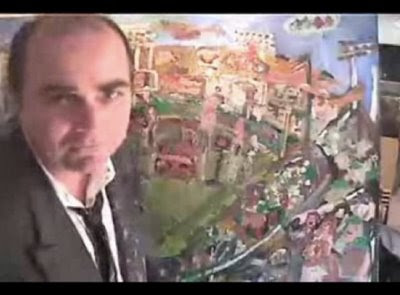 Here we see Let's Paint TV's John Kilduff in front of his almost-complete prophetic oil painting depicting Mannlicher Carcano performing in a celebrity-packed sports stadium, created during the group's October 21st live performance on his daily webcast during the GMC20A"NT"WCM-T08, which is now uploaded in its appointed-timeslot entirety (BBQ sequence omitted) to Youtube. Click here to view. The single is clearly the "extraordinary rendition" of La Bamba, occurring around the 26 minute mark. Could use more cowbell though.
at 10:10 AM 1 comment: 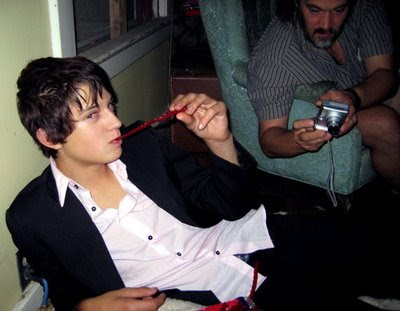 Gogo II enjoys some of the 21 pounds of Twizzlers that were specified in the group's rider for the Museum of Jurassic Technology gig, while Porter documents. Here is a link to last week's Mannlicher Carcano Radio Hour (bumped up again - but the Gryphons were spanked by the Ottawa Gee-Gees, ending the season with a 4-5 overall record, and no more postponed shows for a while.) 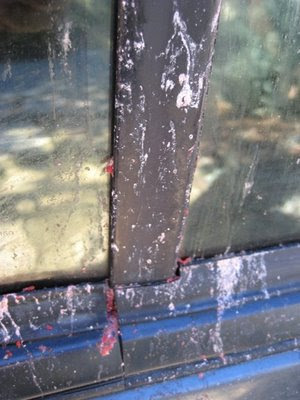 The side of the tour van christened with Twizzler vomit. Here is this week's show: Really, Porter, and Ken Cheezy OMIGOD - featuring the newly relocated Stylophone and newly repaired (after nearly a decade of valvular incoherence) thrift store trumpet.
at 11:25 AM No comments: